CLARUS - User Centred privacy and security in the cloud 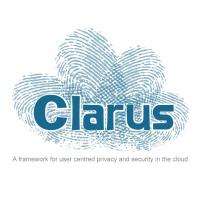 "Using the CloudWATCH2 MRTL service was extremely useful for CLARUS. It helped position our results in terms of technology readiness and most importantly gave us a clearer route to market. The analysis and guides were very clear, also helping to motivate a young trainee and find his feet in the new world of European research and innovation. We highly recommend it to other projects - be prepared for some exciting challenges, thinking outside the box and going that extra mile."

Central to this framework are two delivery models; the CLARUS proxy (a SaaS model) and the CLARUS on premise model (primarily a product, not a service) that will provide the value of the framework to the customer with minimal intrusion to the existing infrastructure.

Without going too much into the technical details of the project, the CLARUS project predominantly targets the health care sector with its project outcomes. While this is clearly a growing market, large corporations have laid significant claims on market shares, so competition on successful market entry and sustaining revenue are expected to be fierce.

The CLARUS project self-assessed its maturity as (MRL 5, TRL 6) whereas the CloudWATCH2 project assigned a score of (MRL 4, TRL 6). This discrepancy highlights a common misconception in project assessment. While there are many good reasons to include demand side representatives (i.e. customers) in the composition of a project consortium the MTRL methodology argues that these cannot be considered intended customers in the sense of Market Readiness Level 5. Instead, MTRL considers those demand side representatives as friendly stakeholders – important actors, who Geoffrey Moore classify as Early Adopters (having propensity for risk) of technology in his book “Crossing The Chasm” (see above). Yet, they are intrinsically biased since they are paid to perform a certain task. Would the same entities act the same way had they not received remuneration for their efforts? This question remains to be answered for each project assessment, and is in all likelihood impossible to answer. Therefore, to err on the safe side, MTRL considers demand side representatives as stakeholders, not intended customers.

Specific recommendations to the CLARUS project were less of technical nature, since the consortium has a very clear picture of the remaining tasks to do. Instead, recommendations emphasise strategic gameplay, and to discuss important questions regarding the positioning of the CLARUS products and services as niche or general purpose, and how to address competition, IPR and licensing questions in a market that shows similarities to the gold rush in America in the 18th century.

Back to "Tips for "go to market" strategies"